When you see the word “catalysis” what’s the first thing that goes through your mind? Is it industry? Metals? Perhaps speed? All of these factors actually play a major role in this principle.

According to the American Chemical Society, Principle #9 states “catalytic reagents (as selective as possible) are superior to stoichiometric reagents.”1 To understand exactly what this means, the definition of a catalyst is needed. A catalyst is defined as a substance that changes the velocity of a reaction without itself being changed in the process.1 The velocity is acclerated by lowering the energy necessary for the reaction to occur.In a chemical equation, it would be shown in the format below.

Notice the catalyst is not a reactant, but just used as a means to transform hypothetical reactants A and B into product X. This topic actually brings into discussion another of the Green Chemistry Principles, Principle 2: Atom Economy, which states “synthetic methods should be designed to maximize incorporation of all materials used in the process into the final product.”2 In the case of the hypothetical reaction above, all reactants are used to form the desired product X, thus the reaction has a 100% atom economy. Since a catalyst is not changed in the course of the reaction, it can be reused for further catalytic reactions.

The above reaction, however, is the ideal situation. It’s not very often a reaction is 100% atom efficient and all catalyst is recovered unscathed. Typically, undesired side products are formed, giving an equation similar to below.

As in the former case, the desired product is X, but this method also produces side products Y and Z, reducing the atom economy of the reaction.

Most catalysts used to perform organic transformations are typically heavy metal coordination compounds, where a small molecule bonds with the said metal. This is where a tradeoff is made for green chemistry. Heavy metals compounds, which are undesirable from a waste and toxicity perspective, are the most useful catalysts due to the chemistry richness associated with the properties presented within the middle of the periodic table. These elements, however, are usually in low abundance, so the reuse of catalysts made from these elements is very important from both a limited availability and waste viewpoint. Depending on the type of catalysis performed, the likelihood of recovering the catalyst can change.

Catalysis has two different variations, homogeneous and heterogeneous. Homogenous catalysis implies that the reaction is occurring all in the same phase. In this case, the catalyst and reactants are all dissolved in a solvent and the catalysis is performed in solution. This method is the most common form presented in the literature, but the recovery of the catalyst then presents a problem. An extraction or precipitation procedure is needed to separate the catalyst from the solution and products, which requires more solvents and thus more waste. Heterogeneous catalysis, however, occurs when the catalyst and substrate are in two different phases. Typically, this means the reactant is in solution and the catalyst is a solid. The surface area of reactivity in this case is lower than that of a homogeneous solution, making for longer reactions times, but purification is much easier and less wasteful. The catalyst can be recovered by a simple filtration, allowing it to be used again and leaving the product catalyst-free in solution.

Finally, there are two more terms associated with catalysis that can correlate with the greenness of its functionality. These terms are the turn-over number (TON) and turn-over frequency (TOF). A catalyst, as mentioned earlier, lowers the energy needed for a reaction to occur, and is not consumed in the reaction, but is regenerated. Thus catalysis operates in the form of a cycle, where a catalyst combines with a substrate and releases the product, reforming the initial catalyst (Figure 1). 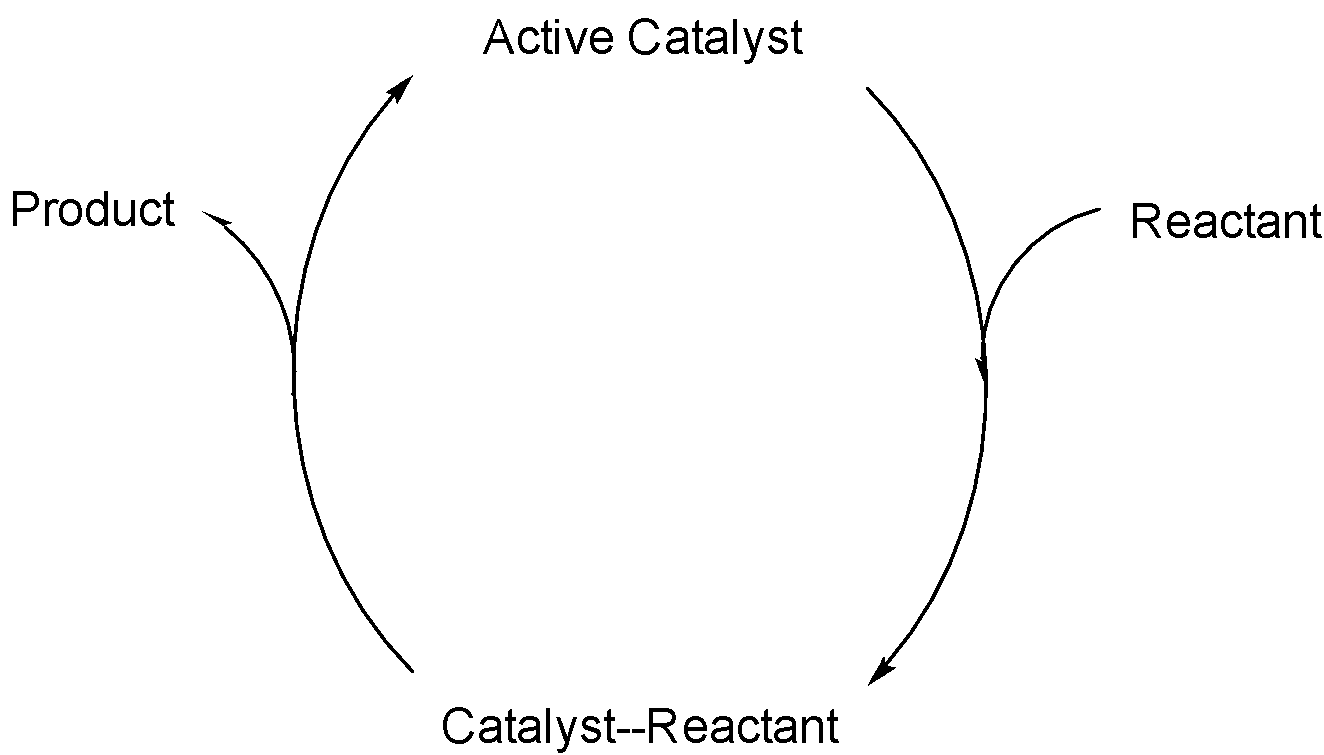 Each cycle releases a product molecule, and the TON is defined as the total number of reactant molecules a molecule of catalyst converts to products.3 The TOF is then defined as the TON per unit time, a rate.3 The higher the TON and TOF, the more product made per unit time, the greener the catalyst is overall. Theoretically this could continue on forever, but in reality the catalyst slowly decomposes due to side reactions. However, the fact that catalysts are used in very small quantities (typically 1-5% of reactant amounts) makes the decomposition downside less significant.

In summary, there are many green factors that play a role in catalysis. Other than the concepts mentioned earlier, other experimental parameters can play a role as well, such as solvent choice. Obviously, H2O is the greenest solvent, but usually other organic solvents are needed for active catalysis to occur. A current list of solvents that are desirable, acceptable, and undesirable are listed here. Synthesizing new catalysts that are active in desirable solvents, that have no side products, and have high TON/TOF is of major significance for greener chemistry to occur.